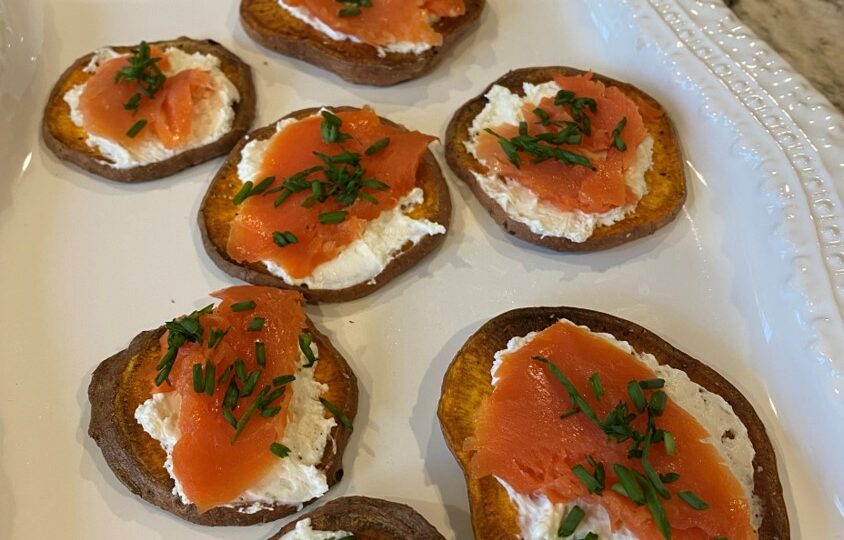 The Holiday Hangries. You know what I’m talking about.

It’s what happens to your family in that space of time between your post-present big brunch and your expansive (and sometimes expensive) dinner.

They start trolling the kitchen. Opening ovens that shouldn’t be opened. Checking cupboards. Perusing the pantry. Standing with the fridge door open reminding you that “there’s ZERO food in this house.” Apparently because they’re starving and cannot possibly wait until dinner.

How to Halt the Hangries

It can be a battle to find crowd-pleasing appetizers. But if you want to tame those holiday hangries, bruschetta and crostini offer the best chance for a victory in my book.

These one- to two-bite wonders offer endless flavor options. You can pair the crunchy, salty, toasted, charred base with sweet or savory seasonal toppings.

Crostini vs. bruschetta—What’s the difference?

Crostini are made with an Italian loaf or baguette that is sliced to about a ¼” thickness, brushed with olive oil and toasted until lightly browned.

Bruschetta is typically made with a rustic or sourdough bread that is sliced (also about ¼” thick), rubbed with garlic and then grilled over a fire to achieve a char.

However, it seems as though crostini and bruschetta somehow (at least in the U.S.) veered from their traditional definitions and now both terms can refer to a toasted slice of bread upon which you place your topping of choice.

Here’s the thing—it doesn’t matter! If you’d prefer to use a rustic bread, rub it with garlic, and char it for the bruschetta recipe, go for it! It will definitely be delicious.

Put any of these appetizers out when the hangries hit and I guarantee everyone will survive until dinner.

Simple to Make−Crostini with Goat Cheese, Prosciutto, and Fig Jam

Get the recipe from: The Italian Dish

In a hurry and need something easy yet impressive? This is THE appetizer.

The Crostini with Goat Cheese, Prosciutto, and Fig Jam is my favorite no-fail, quick-prep, go-to appetizer of choice.

I found this recipe several years ago and I make it fairly frequently when we go to friends’ houses. There are many variations of this recipe out there, but Elaine Schurr McCardel from The Italian Dish first turned me on to these flavors and she deserves all the credit in my book.

At the time I first tried this, I was fairly new to using figs, but I’m always willing to try a new flavor. And so should you.

Eight Things to know about the Crostini with Goat Cheese, Prosciutto, and Fig Jam recipe:

Keep this recipe handy as you’ll likely be making it again and again. Trust me, it’s that delicious!

Get the recipe from: Whitney Bond

Glad I gave this a go, because it’s hearty and delicious!

The combination of baked butternut squash and apple paired with creamy ricotta on top of a crostini provides all the textures your mouth didn’t even know it needed.

Six things to know about the Butternut Squash Apple Bruschetta

This appetizer was universally loved, even by my husband who balks at anything with a sweet flavor.

Made to Impress−Sweet Potato Crostini

Get the recipe from: PureWow

I knew going in that I would have to hide the ingredient list for this from my “taste testers,” aka my husband and daughter, because they “don’t like” several of the ingredients.

They both claim not to like sweet potatoes. In addition, my husband refuses to eat salmon, claiming that “it’s too rich” and my daughter doesn’t go anywhere near cranberries because apparently “they are gross.” Were they wrong? Keep reading…

This appetizer is built on top of a crisp sweet potato chip, but I didn’t tell them that before I made them taste the final product. You know, because of the sweet potato.

Wait…did you say “on top of a crisp sweet potato chip?” Where’s the crostini???

Turns out “crostini” has also morphed into crispy sweet potato chips. In this case, we’re using the word crostini to mean vessel for yumminess. Don’t think. Just give it a try!

Seven things to know about the Sweet Potato Crostini recipe:

So, how did my sweet potato- and salmon-hating taste testers react to these appetizers?

They absolutely LOVED them.

As I mentioned, I refused to tell them what the base of the appetizer was until after they tried them. They both said they “didn’t at all care” that the base was a sweet potato which is high praise from them.

My husband declared the salmon-topped sweet potato crostini to be his absolute favorite, stating that he “could eat a lot of those.” Hmmmm…thought you hated sweet potato AND salmon.

As for my sweet potato- and cranberry-loathing daughter? Before she knew what the appetizer base was, she said “whatever you’re cooking smells delicious” (it was the sweet potato crisps) and then she proceeded to gobble up not only the salmon-topped crostini, but also the cranberry-almond bites!

I knew if they just tried something out of their comfort zone that they just might end up liking it.

Are you ready to get out of your comfort zone and try something new?

Let me know which recipe came out the winner of your appetizer war.