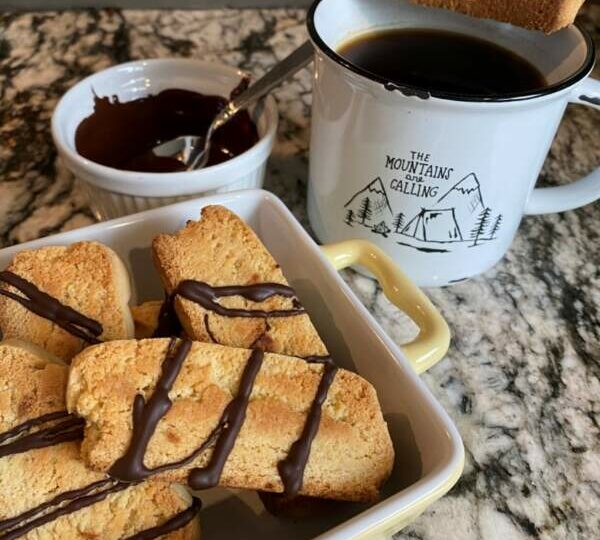 And now…in the “what coffee-infused goodie can I pair with my coffee” category, we find biscotti!

Biscotti are an Italian twice-baked cookie/pastry/biscuit. Crisp and dry, they’re perfect for dipping in my beloved coffee (or tea if that’s your thing).

Personally, I say they’re a pastry in the morning; a biscuit in the afternoon; and a cookie in the evening.

Whenever you reach for your biscotti, they’re the perfect two- to three-bite delight.

And, the best part is that biscotti are Simple to Make, Easy to Elevate, AND Made to Impress.

Are you a home cook who is afraid of making biscotti?

I’ve met a few people who think this is a difficult and time consuming thing.

Biscotti are extremely Simple to Make and offer so many variations to suit your mood.

We’re focusing on vanilla mocha in this post to go with our January coffee obsession, but the biscotti variations are endless.

Want to add slivered almonds for a richer almond flavor? Go ahead.

In the mood for chocolate? That’s never frowned upon.

Love that licoricey anise flavor found in the other Italian cookie–pizzelles? Drop some anise seeds into your dough.

Nuts for nuts? Add some walnuts or pistachios for an added crunch.

Looking for a holiday biscotti? Make yours cranberry/orange.

So, once you get your basic biscotti dough down, you can have a bit of fun with it.

Be sure to drop us a photo and a comment and let us know what you created.

Catch up on All our January Coffee Obsession Posts

I was up early one Saturday and had a bit of time before I headed to Pilates, so what did I do?

That’s right. Sort of a spur-of-the-moment decision to whip up these delectable bites.

That’s the thing with biscotti. For not a big time commitment, you get a big payoff. One batch of biscotti yields around 30 individual treats (depending how you slice them).

If you’re thinking 30 biscotti is a lot, you can freeze a portion of your dough, your half-baked dough or baked biscotti for up to 3 months.

So, what’s stopping you from making some biscotti?

Four things to know about the Vanilla Mocha Biscotti recipe: