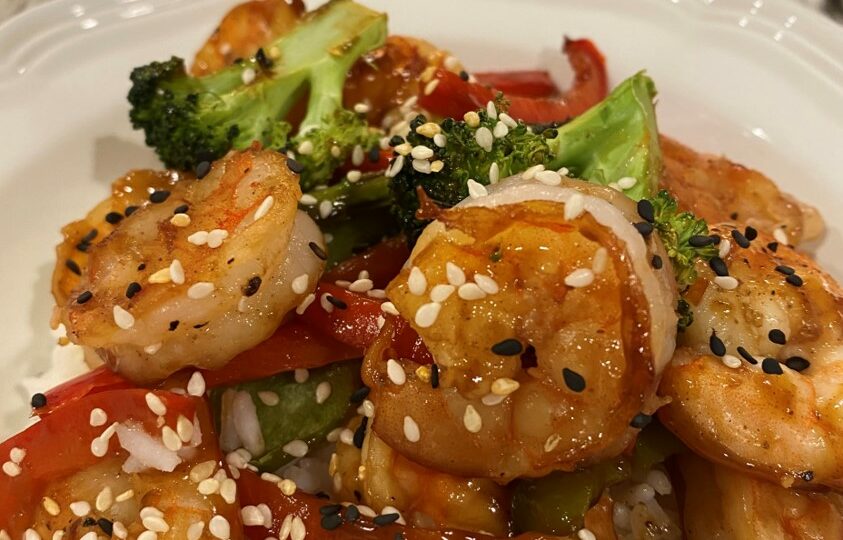 Shrimp is a great weeknight meal option because of its quick cooking time. And sheet pan dinners that allow you to cook the majority of the meal (other than the rice) in one pan?

I knew my night was going to be tight on time to get dinner on the table and this promised a 17-minute turn-around.

That kind of timeframe is right up my alley. Did it deliver? Keep reading…

We always have sesame oil, hoisin sauce, tamari, and Chinese five spice on hand. If those aren’t part of your pantry, I’d recommend adding them. We also normally have frozen shrimp, but didn’t this night so it was off to the store for shrimp and bell peppers.

Quick note: We’re landlocked here in Colorado, so we don’t have access to off-the-boat fresh shrimp.

Does that mean our shrimp stir fry suffers? Absolutely not!

In fact, most shrimp is immediately thrown on ice and frozen after being caught.

So, even if it is “fresh-off-the-boat,” it’s most likely been frozen.

What about the “fresh” shrimp at the grocery store, you ask? Well, hate to be the bearer of bad news, but that is just previously frozen shrimp that has been pre-thawed for you by the fishmonger. And now it’s no longer frozen so it’s becoming less fresh as the minutes tick away…

All of this begs the question: What’s fresher—fresh or frozen shrimp?

The answer is…frozen. Check out this article from Bon Appetite for the full scoop.

Next time you’re in a pinch, give this quick stir fry a try. Drop us a note and a photo of your weeknight recipe rescue!

Chinese Five Spice not only amps up the flavor of stir fry, but also works well in soups, added to fried rice, as seasoning on roasted vegetables, and used as a spice rub on pork, lamb, chicken, or steak.

And, you can also add a dash of Chinese Five Spice to cakes, pies, and cookies! It works especially well with chocolate, pumpkin, gingerbread, and spice-based treats.

Check out this article from The Spruce Eats for a deep dive on Chinese Five Spice’s origin, ingredients, taste, usage, storage and more.