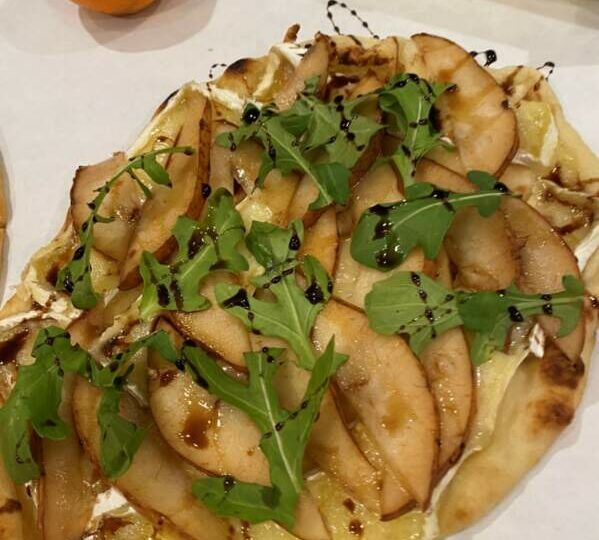 Sometimes the best appetizers use a store-bought base, just a handful of ingredients and take the least amount of time.

That’s exactly what you get with the Warm Pear Brie Arugula Naan from A Cedar Spoon.

Six ingredients come together to create a melty, sweet, salty, and savory appetizer that you’ll want to make over and over.

Seriously, this one is going on my “I need a quick and impressive appetizer” list.

Will l feel bad for my friends because they’re going to eat this appetizer frequently?

Because it is so dang good!

Looking for something sweet to pair with this naan?

It’s always nice to offer both a sweet and savory option when hosting for a group. Some people are always Team Sweet while others stick to Team Savory. And then there are those who pick their team depending on the day.

So, if you’re looking for a Simple to Make, sweet option, be sure to check out our insights on The Simplest Ombre Citrus Cream Tart. It’s on the table in less than 30 minutes and is a show-stopper.

Simple to Make | Made to Impress−Warm Pear Brie Arugula Naan

Get the recipe from: A Cedar Spoon

But the problem with pears is that they seem to be ripe for all of 10 minutes.

That’s right. You wait and wait and wait for them to ripen and if you miss that 10-minute window, brown spots appear and the fruit starts to go bad.

So, one of the best ways to use pears is in a recipe that bakes them.

You don’t have to wait for them to hit that perfectly ripe window.

As a matter of fact, pears on the firm side that are just veering toward ripe are perfect for this Simple to Make and Made to Impress appetizer.

Next time you’re in a rush and need a quick and impressive appetizer, try this Warm Pear Brie Arugula Naan. Your family and friends won’t be able to resist it!