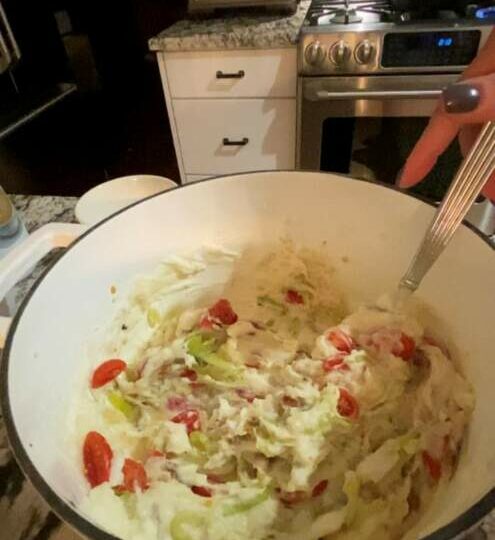 Everyone loves mashed potatoes, right? But have you ever tried BLT Smashed Potatoes?

If you haven’t, you’re missing out!

These BLT Smashed Potatoes are one of the quickest ways to raise the stakes when it comes to mashed potatoes.

Speaking of steaks…this recipe was a partner to a Marinated Grilled Flank Steak recipe from Rachel Ray and, in a very not-me move, I glossed right over the steak portion of the recipe to get to…THE SIDE DISH!

If I remember correctly, I saw Rachel Ray make this years ago on 30 Minute Meals and the BLT Smashed Potatoes caught my attention because this was a new way to add bacon to my mashed potatoes.

However, if you’re looking for steak ideas, check out these two posts:

Get the recipe from: Rachel Ray Food Network

Lettuce in your potatoes, you ask?

That would be gross.

The L in this recipe is for leeks.

But…you need to know how to clean them. Keep reading for those details.

Next time you’re in the store and thinking about making mashed potatoes, grab some leeks, bacon and tomatoes and smash up this version. FYI…leeks look like green onions on steroids.

Five things to know about the BLT Smashed Potatoes Recipe: