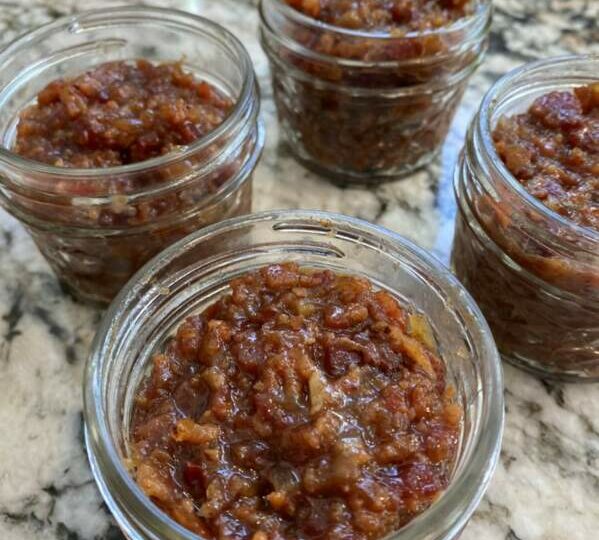 I was inspired to find a few savory jams and, let me tell you, I hit the jackpot with bacon jam.

Like me, you probably see savory jams at holiday marts or local fairs, but may not have tried to make them on your own.

Well, now’s the time to try!

They’re really not hard to make—most of the time is spent cooking the bacon and simmering the mixtures down to a syrupy consistency.

Not a lot of hands-on time.

So, if you’re looking for an alternative to sweet jams, look no further.

This simple and savory jam is perfect if you want to dip your toe into making your own bacon jam.

The flavor combination of maple and bacon is a classic and this recipe doesn’t disappoint.

When I initially found this recipe, it was on Becca Piastrelli’s website. However, it appears Becca has changed course and is focusing on non-recipe interests now. With that in mind, her recipe is reprinted at the end of this page. It’s too good not to share.

Five things to know about the Maple Bacon Jam recipe:

If you’re looking for an easy and impressive way to step up your jam game, this is your go-to option.

The flavor boost of adding caramelized onions to bacon jam puts this recipe in our Easy to Elevate category. While the recipe itself is no harder to make than the Maple Bacon Jam, the sweet caramelization on those onions will make you glad you tried this version.

Five things to know about the Caramelized Onion and Bacon Jam recipe:

I won’t lie…the smell of the balsamic vinegar during the cooking process was potent and I was wary that the end product would be balsamic heavy in flavor.

I was very wrong. The final product is mellow and quite addicting!

Let’s first talk about Julie Espy’s blog name—Bread Booze Bacon. Three of my favorite things when it comes to cooking. The name alone virtually guarantees I’ll be testing more of her recipes, so stay tuned for more yummy goodness.

While I’m not a big fan of bourbon in my cocktail life, I understand how the combination of it with caramel sauce and bacon would be a hit.

The Bourbon Caramel Bacon Jam was by far the family favorite in our house. I’ll be spreading this on EVERYTHING!