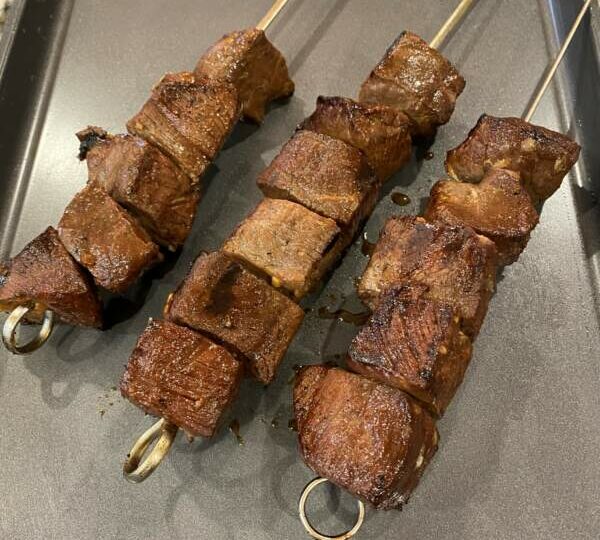 Growing up, hands down my absolute favorite summer meal was steak shish kabob and grilled vegetables. It still is.

Big chunks of rare steak that have soaked up a salty, garlicy, tart marinade. Doesn’t get much better than that!

But it’s not just the marinated, grilled steak. It’s also the charred vegetables that make this meal one for the ages. Peppers and onions and tomatoes. That little bit (or lotta bit) of char elevates their flavor. More on that later…

Our family recipe has been handed down through, well, one generation. Not quite time-tested you wonder?

Well, if it’s based on how many times we make this and how many compliments we get when we feed others with it, it’s passed the test.

My copy is written down on a scrap of paper, stained with soy sauce and vegetable oil and taped together from the time I accidentally tore it.

Much loved and much used.

In fact, when my daughter’s college volleyball team came to town for a tournament a few years ago, we fed the whole herd using this recipe.

I don’t know where the recipe originally came from but I distinctly remember asking for this meal endlessly over the summer when I was growing up.

And, I was actually willing to help make it which speaks to how much I liked it because at that point, I wasn’t into helping with the cooking that much.

The preparation is extremely simple, but you do need to plan ahead as you’ll need to marinate the meat overnight.

Great for a Crowd AND Works with Chicken

One of the best things about this recipe is that it’s possibly one of the easiest to scale for a large crowd. AND the marinade can be used for chicken as well (with a shorter marination time).

Remember when I said we fed my daughter’s college volleyball team with this meal? Well, there were 18 women (15 players and 3 coaches) plus my husband and me that night.

We bought 15 POUNDS of steak and chicken and prepared it using this recipe. We also made a few pounds of chili lime shrimp for one of my daughter’s teammates who eats fish and shellfish, but not chicken or beef.

My husband and I (wrongly) assumed we would be able to eat given that we made almost 20 pounds of protein. We also made a green salad, Mexican Street Corn Salad, and had bread and dessert.

We went hungry that night. There was not one shred of steak, chicken, or shrimp left after the team ate.

Hopefully, you will find the same success with this recipe.

Traditionally, we always make this recipe with steak, but when I needed to make it for a group of college athletes, I figured I’d better pivot and make some chicken as well.

Nothing about the marinade itself changes when you switch to chicken. However, the chicken only spends about 2-4 hours in the marinade as opposed to the steak that soaks for up to 24 hours.

One thing you’ll notice in my photos is that I’m a stickler for skewering your meat and vegetables separately. Not only it is a food safety issue to keep raw meat separate from vegetables, it’s also a cooking time issue.

We like our steak Shish-Kabob rare to medium-rare, which takes about 1-2 minutes per side on the grill, depending on the size of your cubes (ours were about 2” square).

However, we like our vegetables grilled longer. In fact, the onions are grilled the longest, as we like more than a little char on those. For the tomatoes, we grill them until they just start to split. Because of the difference in grilling time for the vegetables, over the years I’ve moved to single-ingredient skewers for the vegetables as well. It allows you to better control your cooking time and char level.

If there are other vegetables you like on the grill, skewer them up and grill them!

Ah, you’re quite observant! There is zero salt in this marinade. Why not? Because the soy sauce contains more than enough salt for the recipe. Even if you’re substituting Tamari or coconut aminos for the soy, those also contain enough sodium to make the marinade perfectly salty. Trust me on this.

NOTE: This marinade works well for either steak or chicken, however, DO NOT marinate the steak and the chicken in the same container. There’s a chance for a cross-contamination issue when you have a protein like steak that you may only cook to rare with a protein like chicken that absolutely needs to hit it’s 165°F temp. In addition, the marination time for the steak and chicken is different. Keep reading!

When it comes to grilling our veggies, I put each type of veggie on its own skewer because we cook some longer than the others and it’s just easier to get the desired level of char if they’re on single-veggie skewers.

There is also no set time for grilling each type of veggie. Do what works best for your family and your taste preferences.

Seasoning Note: You’re not missing anything. We literally DO NOT SEASON our veggies before grilling them. If you prefer to season yours, go right ahead! A little olive oil, salt and pepper would be a great basic seasoning.

Additional Grilled Veggie Ideas: While our traditional Shish Kabob meal uses onions, bell peppers and tomatoes, there are so many more veggies you can toss on the grill:

Leftover Alert: Any leftover steak or chicken from this recipe makes for great next-day cheesesteaks. Plus, you already have your grilled veggies to add to the cheesesteaks!

4th of Julygrillingkebobsshish-ke-bobsteaksteak on the grill